Magazine #60
On the occasion of the 35th anniversary of ABBAs legendary concerts at Wembley, Benny answered fans' pleas, and a live recording will be available through the ABBA Fan Club Shop. Let's re-live the magic of these moments with this article printed in our magazine 15 years ago.

Can it really be twenty years since I saw ABBA in concert?

Here we are in 2014, and it's as if ABBA has always been around. The fantastic Mamma Mia! musical has been playing around the world for years, the Mamma Mia! musical motion picture was a big success, and ABBA’s 22-year-old ABBA Gold has made recording history. Forty years have passed since Waterloo catapulted ABBA to fame, and my two daughters absolutely love ABBA! They used to dress up to put on shows miming to ABBA songs.

But for me, I've seen the real thing. In 1979 I was the excited teenager traveling to London with prized tickets secured through the UK fan club earlier in the spring. I was about to witness one of the most memorable moments in my life (especially because I managed to get backstage to meet them at the end of the concert). 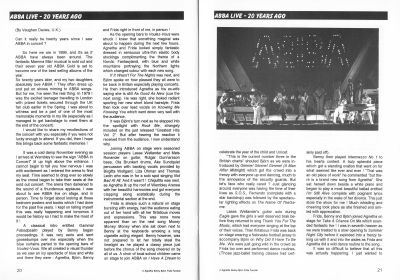 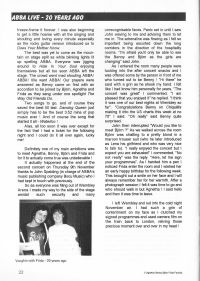 I would like to share my recollections of the concert with you especially if you were not lucky enough to attend. If you did, then I hope this brings back some fantastic memories. It was a cold damp November evening at Wembley. A sign saying “ABBA in Concert" lit up the entrance. I was nervous as I entered the arena to find my seat. Time seemed to drag ever so slowly as the crowd began to fill in at the sold-out concert. The arena then darkened to the sound of thunderous applause. I was about to see ABBA live on stage — in person. It was time to forget about looking at those posters and books which were in my bedroom for the past five years. I kept telling myself this was really happening, and tomorrow it would be history. So I had to make the most of it.

A classical intro entitled Gammal Fabodpsalm played by Benny began the concert. It was eerie. I felt goosebumps when the blue curtains parted to the opening bars of Voulez-Vous. There was thunderous applause as the audience saw an icy spectacle of blue and white. Suddenly, there they were — Agnetha, Björn, Benny and Frida — right in front of me, in person! As the opening bars to Voulez-Vous were struck, the music felt magical. Agnetha and Frida looked simply fantastic, dressed in sensuous ultra-thin elastic body stockings complementing the theme of a Nordic Fantasyland, with blue and white mountains portraying the Northern Lights. The mountains changed colour with each new song.

If It Wasn't For The Nights followed, and Björn spoke about how pleased the members of ABBA were to be back in Britain, especially playing concerts. He then introduced Agnetha as his ex-wife, saying she is still “As Good As New.” It was a cue for the next song of the same name. Agnetha looked radiant, sporting her new short blonde hairstyle. Frida then took over lead vocals on Knowing Me Knowing You which was appreciated by the audience.

It was Björn's turn next as he stepped into the spotlight with Rock Me, strangely included on the just-released "Greatest Hits Vol. 2.” But after hearing the reaction it received from the audience, I now understand why.

Chiquitita was next, as Agnetha lit up the roof of Wembley Arena with her beautiful harmonies and got everyone applauding ecstatically during the instrumental section at the end. Frida used all her flirtatious moves and expressions on the next song, Money Money Money, when she sat down next to Benny at the keyboard smoking a long cigarette and acting elegant. Benny however, was not prepared to let her totally steal the limelight. He played an elegant piece just before the chorus of the song, cheered on by the audience. 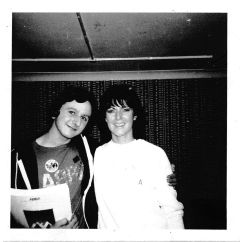 A choir of local school children came on stage to join ABBA on I Have A Dream to celebrate the year of the child and Unicef. "This is the current number three in the British charts,” said Björn as we were introduced to Gimme! Gimme! Gimme! (A Man After Midnight) which got the crowd into a frenzy. Everyone was dancing, much to the annoyance of the security guards, and having a great time as S.O.S. and then Fernando (complete with a star backdrop) were followed by the spectacular lighting effects on The Name Of The Game.

Lasse Wellander's guitar solo during Eagle gave the girls a well deserved break before they returned to sing Thank You For The Music, which had everyone singing at the top of their lungs. Then flirtatious Frida was back on stage wearing a Nebraska football jersey to accompany Björn on Why Did It Have To Be Me? We were just going wild in the crowd as Frida took over to dance solo.

Benny then played Intermezzo No 1 for a long time. It received a standing ovation. "That was an old piece of work,” he said, "but here is a brand new song from Agnetha.” She sat down beside a white piano and began to play a most beautiful ballad entitled I'm Still Alive. The lyrics were especially poignant in the wake of her divorce. This just stole the show for me. Much whistling and cheering followed as she finished and smiled with appreciation.

Frida, Benny and Björn joined Agnetha on stage for Take A Chance On Me which sounded fantastic live. Next was a slow opening to Summer Night City which then exploded into a frenzy. Members of the audience were in the aisles as Frida and Agnetha did a wild dance routine to the song.

It was so difficult to believe that all this was actually happening. I just wanted to freeze-frame it forever. I was also beginning to get a little hoarse with all the singing and shouting and loving every minute especially as the rocky guitar version introduced us to Does Your Mother Know. Then the mountain on stage split as white blinking lights lit up, spelling “ABBA.” Everyone was dancing to Hole In Your Soul.

Then, ABBA left the stage. The crowd went mad, shouting “ABBA! ABBA! We want ABBA!” Soon, though, ABBA returned. Benny walked back first with an accordion. He was joined by Björn, Agnetha and Frida as they sang under one spotlight The Way Old Friends Do.

Then they played one of ABBA’s biggest hits, Dancing Queen. It just simply has to be the best 3:52 minutes of pop music ever. And of course they finished with the song that started it all, Waterloo. Alas, all too soon it was over except for the fact that I had a ticket for the following night and I could do it all over again. Lucky me!

Definitely one of my main ambitions was to meet Agnetha, Benny, Björn and Frida. It actually happened at the end of the second concert on Thursday, the 9th of November, thanks to John Spalding (in charge of ABBA's music publishing company, Bocu Music) whom I had kept in touch with previously.

So as everyone was filing out of Wembley Arena, I made my way to the side of the stage through security. Suddenly, I saw John waving to me and advising security to let me in. The adrenaline was flowing as I felt so important being escorted down the long corridors in the direction of the hospitality rooms. "I'm afraid you'll only be able to see the Benny and Björn as the girls are changing,” said John.

As I entered the room many people were eating the after-concert snacks. I was offered some by the person in front of me who turned out to be Benny. "Hi there,” he said with a grin as he shook my hand. I felt like I had known him personally for years. "The concert was great,” I said. "I am pleased that you enjoyed it,” he replied. "I think it was one of our best nights at Wembley so far.” "Congratulations, Benny, on Chiquitita’s making it into the U.S. charts this week at number 70,” I said. "Oh really?” said Benny, quite surprised.

John then interrupted. “Would you like to meet Björn?" he asked. As we walked across the room, Björn was chatting to a pretty blonde in a maroon trouser suit. He later introduced her as Lena, his girlfriend. She was very nice to talk to. "I really enjoyed the concert, but I expect you are exhausted" I said to Bjorn. "No, not really" he said. "Here, let me sign your programmes.” As I handed him a pen I noticed Frida enter the room, and I wished her an early happy birthday for the following week. This brought a smile to her face, and I will always remember her warmth. After a photograph session, I felt it was time to go. But Agnetha walked in. I said hello and then it really was time to leave.

I left Wembley and went out into the cold night November air. I had such a grin of contentment on my face as I clutched my signed programmes and exposed camera film on the train back to London, thinking about those precious moments over and over.

Musical note: Joining ABBA on stage were seasoned session players Lasse Wellander and Mats Ronander on guitar, Rutgar Gunnarsson bass, Ola Brunkert drums, Åke Sundquist percussion with backing vocals provided by Birgitta Wollgard, Liza Ohman and Thomas Ledin who was in for a solo spot singing Not Bad At All.