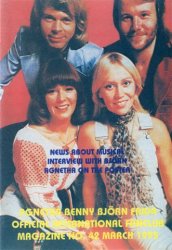 For the first flash back I choose a story about Kristina från Duvemåla, it stood in the magazine number 42 which released in 1995.

Beside the story we got from Görel the first press photo's of the cast and we were very proud of it.

Kristina från Duvemåla is the new Swedish musical by Benny and Björn.

The musical is based upon the book Utvandrarar by Vilhelm Moberg. They condendes 2096 pages into a musical. Kristina will be the main character in this musical. Her longing to go back to the homeland of Duvemåla, Småland, is the major theme. She doesn't want to leave Sweden, but feels forced because of the poor life she and her husband Karl Oscar have. It's like the most immigrants in those day's, so said Björn. "We had discussed for many years that we wanted to write a musical after Chess" I think we learned from all the mistakes that we made. We know that you need a good story for a strong musical, accoording to Benny. "If we get cold feet, a few weeks before the musicalpremiere then we can't blame the story because that is great". The English and French people often look towards their own literature for ideas and this is what the boy's did too. First they thought about Selma Lagerlöf's Gösta Berling but then their eyes felt on the book by Vilhelm Moberg. This story had the quality Yes, that they were looking for. It not only sounds and tastes Swedish, but it also is an universal drama. We wanted our text to be as close to Moberg's own and try to give it a poetical touch, so explains Björn.

Folkmusic will play a big role.

This is not new to Benny. As he already played this type of music together with Orsa Spelmän. "It must be like this when you hear the music, it must remind you of Duvemåla". The stage design will be done by the American Robin Wagner, who just visited Småland to taste the life there. Robin has worked on various Broadway musicals and on the Rolling Stones concert sets.

And who are the people who will play the four leading roles?

Let me introduce them for you.

The musical will be directed by Lars Rudolfsson. The opening night will be the 7t october 1995 in Sweden, Malmö music threatre Storan.

We are sorry but the list of performances dates was not available at the time of printing this magazine. We will have it in our next issue. But we assume it will run almost every day after the premiere in Malmö. The ticket sales will start on teh 13th of march 1995. After this date you can make reservations.

(As we all know the musical became a hug hit, and Görel gave us even a ticket for the premiere. In april a concert version will take place in the Royal Albert Hall and no need to say it will be a huge success. The performers of the musical are still activ and Helen is even singing in BAO. She is the only one of the old cast who is still involved and so she sing the part of Kristina in Londen.)